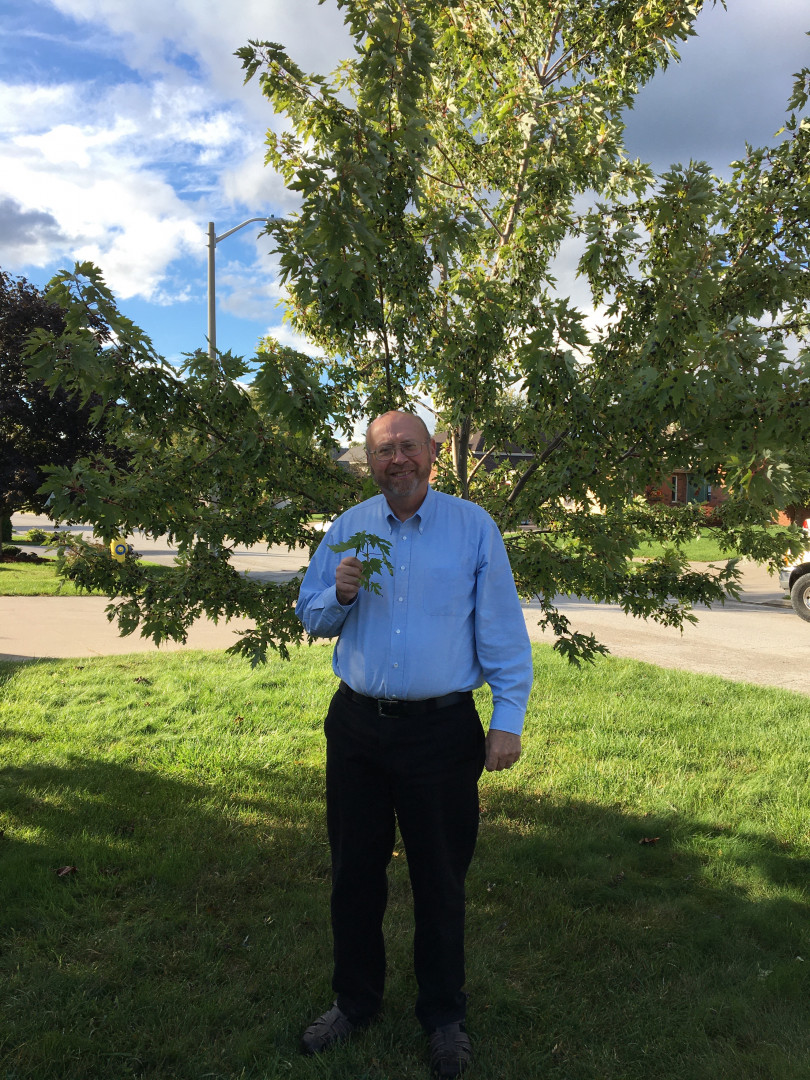 When something gets ruined, God births a new start.

My family moved into our new home in Windsor in 2015. The first time I cut the grass I saw it—a tree about 15-16 feet tall—all dead, except for one green branch with a few paltry leaves. My thought was along the lines that the tree was done—and why had the neighbors not taken the tree out?

Every time I cut the grass, I would say to myself, that tree is dead—why don’t they take it out? Sometimes I cut the lawn twice a week—and that question would return each time.

And then, one day, my wife and the neighbor were having a chat about that tree.

You see, it had been a lovely tree—and the year before we moved in, the winter had been bitterly cold—so very cold that it killed off most of that tree—except that one branch. Not sure of what to do, they thought to leave it for a year to see what would happen.

And of course, the tree did not improve. So, the neighbor was wondering whether she should take it out.

Now at the base of the tree, there were several sprouts shooting up from the side of the weakened trunk. One shoot looked strong and vibrant—and was about 3 inches long. I’m not sure where the idea came from, but the neighbor borrowed a saw from us, and between my wife and the neighbor lady, they toppled the 14 feet of dead trunk and branches. On a whim, they left the one 3” shoot springing up from the side of the stump.

Within two months, (and only two months!) that three inch sprout had grown to 12 feet high… 12 FEET! Branches filled with leafy green vitality shot out from the new shoot which had thickened to become a trunk.

A healthy silver maple tree in good conditions, with sufficient water, decent sunlight and good soil, usually grows 3 to 4 feet a year, as it begins to establish itself.

No one I spoke to had ever heard of a three inch maple sprout becoming a 12 foot tree in months!  How did it happen?

The roots under that shoot had grown for a decade before that. Slowly and steadily, those roots expanded until they could sustain a 14 foot tree before the year of the winter kill. The severe cold destroyed most of the branches, except one. There was a solitary branch that had a sustained connection with those roots—and those roots pushed sap into that one branch, to receive the benefit from the scanty leaves on that single branch, to feed the roots for that decade old tree.

When the three inches of sprout had a direct connection to those roots, it shot up and became a tree that could feed the famished roots through photosynthesis. And so, pent up for years, it grew, and grew, and grew, becoming almost as tall as it was before the trouble.

Now it has surpassed its original size. In the picture above, you can see me holding a three-inch sprout, standing next to a tree that is fully three times my height.

There is a Bible application—and a lovely, clear one. There are seasons in life in which years of growth are ruined by some awful circumstance. What was once lovely and fruitful, and granted shade to many may in fact be ruined. What was, seems lost. The ruin falls, and all that is left is a stump.

And God can cause something beautiful to arise from what was destroyed and do so in record time. And that is lovely food for thought—if something lovely has been destroyed in your life. You can ask God to do just that!

In fact, he did, in the line of King David of ancient Israel.

When Israel’s kingdom was destroyed, God did something new… You see, David’s kingdom, the rule of his dynasty arose from his father’s Jesse’s pure devotion—and the throne of David was destroyed. Jesse’s family tree was reduced to a stump. Israel grieved…

Then Isaiah the prophet spoke these astonishing words:

A shoot will spring from the stem of Jesse,

And a branch from his roots will bear fruit.

The Spirit of the Lord will rest on Him,

The Spirit of wisdom and understanding,

The Spirit of counsel and strength,

The Spirit of knowledge and the fear of the Lord…

When the line of David lost their right to rule a kingdom, God preserved a meagre, thin line of his descendants. A solitary branch still grew, though the rest of the tree was destroyed. From that line, a man named Joseph grew to adulthood, learned a trade, and became a carpenter. Joseph married Mary. She gave birth to Jesus of Nazareth, “a shoot… from the stem of Jesse.” He grew—and brought salvation to us.

That dead tree blossomed--and now there are millions on earth who are connected to that shoot from Jesse's stem!

God can cause your tree of faith to be restored. Ask Him and He will.