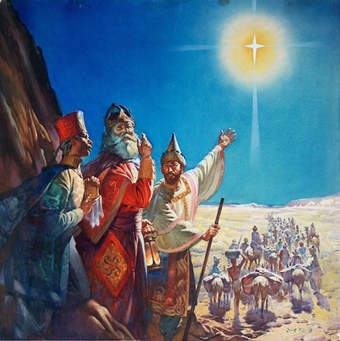 That Star is INSIDE OUT!

That Star is “Inside Out!”

If something is inside out, you pay attention…

This only happened once to me—and never again!

I was a new student in a different middle school. At that age I was self-conscious, so I put my “best” “ordinary” pullover on, knowing it looked fine—a match for the kind of day, a kind of clothing that would suit but not draw attention to the new guy. Okay, but unobtrusive.

So, I sat down in the first class, at the desk just ahead of a soft-spoken girl I had only just met, and, with the rest of the class, worked my way through the first half hour.

The girl behind me tapped on my shoulder.

I didn’t want to turn around.

She tapped again; I didn’t want to pay attention.

She tapped a third time, so when the teacher was focused on another student, I turned a bit so that she could whisper softly.  Only she and I heard…

“You might want to head to the rest-room… Your sweater is on inside out!”

Press pause—and put yourself in the shoes of someone in 7th grade, just hitting puberty.

Feel the red flush rising up your neck to the lower part of your face, as you ask the teacher if you could head to the restroom…

Now, feel the thankfulness as the realization comes that no one else noticed—and the girl behind you was soft spoken and well mannered.

I noticed… and never let that happen again!

When things are out of place, in the wrong location, at the wrong time, even in the wrong color, if it is out of the ordinary, people pay attention.

That’s why they noticed!

Who? Why the Magi noticed—though this was nothing so insignificant as an inside out pullover.

These were astrologers, who had spent their lives watching stars… There was a regular routine to those stars above. They behaved in a regular kind of way… The night sky always “behaved”—the moon followed a pattern as it waxed and waned. So did the fixed rotation of the stars, and how it appeared that they would circle through the night sky.

Magi were an order of magicians; they were sorcerers who practiced the mystic arts. They show up as the enemies of the prophet Daniel and his three friends, 500 or so years before this event happened (you can read about how Daniel and his three friends wound up saving their lives in Daniel, chapter 2—and of how in jealous rage, they had him thrown into the lion’s den in Chapter 6—and of how he escaped by faith in God).

Magi practiced the mystic arts—something banned by Moses for Jewish and Christian faith. That included astrology—reading from the position of the stars what the destiny of a person born under a zodiac sign would be…

Those magi (actually "magicians") had done this for generations, leading right up to the time when the Magi (also called “Wise Men” in the Bible) noticed that the star pattern was inside out! Upside down!

In Ordinary Astrology, the position of the star determined the destiny of the baby.

Yet this got turned upside down:

When Christ was born, the position of the Baby determined the destiny of the star!

That shirt was on “inside out!” And the whole class noticed.

A group of magi (at least three—likely more) took one to two years out of their lives. They closed up shop, and found three gifts suitable to a king whose birth could move stars out of their ordinary orbit; then they gathered resources to travel--tents, and sleeping grear. because they were wealthy, they would have brought armed guards with weaponry, provisions, water, camels, clothing, extra monies for the unexpected, to follow that star—because that Child’s influence on the stars broke all the rules.  That Child’s influence turned their understanding of power, of leadership, of kingship, and even of God Himself, inside out, upside down, topsy turvy…

The narrative even says that they received advice from the Hebrew King, who asked some priests about where the Christ was to be born—and as they travelled there (to Bethlehem) an astonishing thing happened.

After hearing the king, they went on their way;

AND THE STAR WHICH THEY HAD SEEN IN THE EAST WENT ON BEFORE THEM,

The star in the sky moved to right over the place where the Child-King, and Mary and Joseph were! Stars don’t do things like that! These star-gazers knew they were in the Presence of one mor powerful than a star.  More than a star-child, He was the Maker of the Stars—in human form, to raise the lowly to the highest place.

We can be sure that the arrival of strangely dressed and wealthy foreigners, practitioners of mystic arts, caused Mary and Joseph to raise their eye-brows--and to have their worlds turned inside out as well… Though God the Son already knew that His life would be the source of everyone’s life being turned inside out… Actually, back right again.

Our lives are already “inside out.” Jesus came to speak to us gently that things in our fallen world are utterly reversed! They need to be righted—by positioning the Christ-Child within our wounded hearts, to heal them—and even move heaven and earth to save us. He came to gently “whisper in our ears,” to tell us how we can make things right again.

Jesus would guide us, to put it back the right way once again! That is why the pagan Magi noticed. Our response should be just like theirs…

They saw the Child with Mary His mother; and they fell to the ground and worshiped Him… Matt 2:11b NASB

We would be wise to do the same…